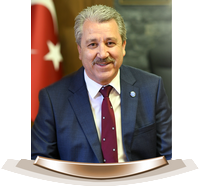 Necdet Budak was born in Edirne in 1964.

In 1986, he graduated from Ege University Faculty of Agriculture’s Department of Field Crops and started to work as a research assistant.

In 1988, he received his MSc degree, after finishing his thesis on seed production from the same department.

From 1990 to 1994, he studied in Nebraska University with a scholarship from USA, on plant breeding and genetics and received his PhD degree.

In 1997, he studied seed science and technology in the Netherlands with the scholarship, which was provided by the Government of the Netherlands. He became a professor in Ege University Faculty of Agriculture and published 80 academic studies in both national and international areas.

In 2007 he was elected to the parliament again and took part in the Committee on Planning and Budget.

In 2017, until he was appointed as the Rector of Ege University, he worked as the consultant of the Minister of Agriculture and Forestry.